Government of Dubai Media Office – 01 May 2021: Dubai Autism Center successfully concluded its 15th Annual Autism Awareness Campaign after a month-long programme of events and activities organised with the support of the public and private sectors and members of the community.

The annual campaign was launched on World Autism Awareness Day on 2 April under the patronage of HH Sheikh Hamdan bin Mohammed bin Rashid Al Maktoum, Crown Prince of Dubai, with the aim of educating society about the importance of empowering individuals with autism and integrating them into mainstream life.

Outlining the key results of the campaign, Mohammed Al Emadi, Director General and Board Member of the Dubai Autism Center, said: “During the campaign, the Dubai Autism Center witnessed a high turnout of parents keen to take advantage of the free consultation sessions for children suspected of having autism. The Center’s clinic registered over 110 requests for consultations just in the month of April.”

“In line with the objectives of the National Autism Policy approved earlier by the UAE Cabinet and the goal of sustainably reducing the financial burden on families of people with autism, the Dubai Autism Center decided to continue providing free consultation sessions on a permanent basis. This initiative will no longer be restricted only to the month of April. Through this initiative, we aim to encourage parents to seek timely diagnosis and ensure early detection of autism, which will facilitate their children’s access to early intervention services suited to their needs,” Al Emadi added.

“Despite the circumstances of the COVID-19 pandemic, awareness webinars helped us disseminate campaign messages among a wide range of institutions. Over 1,250 people attended the webinars organised by us,” he said.

Al Emadi expressed his appreciation for the cooperation extended by the Dubai Electricity and Water Authority, Dubai Duty Free, Awqaf and Minors Affairs Foundation in Dubai, Dubai Police, and the Ministry of Education to host awareness webinars and educate their employees about autism. Such awareness efforts are critical to help create an inclusive environment for people with autism that meets the highest benchmarks, which advances the community’s sustainable development, he noted.

Campaign advertisements were also shown in 300 cinemas run by VOX Cinemas and Novo Cinemas throughout the month of April.

Al-Emadi expressed his gratitude and appreciation to all the campaign’s partners and sponsors for their role in spreading campaign messages through innovative means to increase social awareness of the needs of individuals with autism and their families.

Al Emadi also expressed his sincere thanks and gratitude to the Government of Dubai Media Office for its extensive efforts to support the campaign across mass media on the widest scale to reach the largest possible audience across all segments.

The campaign primary goal was to increase public awareness and promote a better understanding of various challenges related to individuals with autism and how the community’s acceptance and understanding is critical in creating an inclusive environment for them. 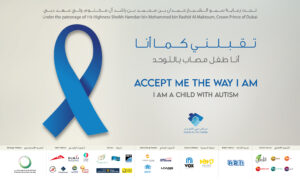